The Aikikai Foundation has been an incorporated entity in Japan since 1940. It is headed by the doshu, the living successor of the founder of aikido.

The Aikikai Foundation operates a Hombu dojo in Tokyo, which is also named Aikido World Headquarters or the Aikikai Hombu to distinguish it from the headquarters of other aikido organisations. The location of Aikikai Hombu dojo is in Wakamatsu-cho, Shinjuku, Tokyo, Japan. The dojo was established in April 1931 by the founder of Aikido.

The International Aikido Federation is an umbrella organisation with member organisations from more than 40 countries.

The IAF organises International Aikido Seminars every four years, facilitating training between aikikai aikido students of different countries, sharing instruction by the world's most senior aikikai instructors, and also providing a channel for official communication with the Aikikai Hombu.

Aikikai is not one style of aikido but instead encompasses a diversity of technical styles.

This is associated with the broad base of first generation instructors, who each had their own interpretation of the art, and other influences. Nonetheless Aikikai is often described as a style for comparison with other aikido organisations that either fell foul of or left the Aikikai organisation. Aikikai Aikido is sometimes mistakenly referred to as "traditional" Aikido. 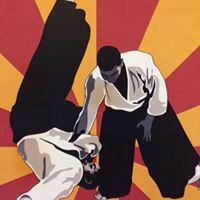 An Evening with Mark Ryan Sensei