Real weapons are rarely seen or used during training due to the very real danger of serious accidental injury, so it is rare to see a live blade (sword, yari or tanto) in Aikido practice. Instead we practice with wooden replicas.

Weapons are used in Aikido training to introduce varying combat distances, as well as variations in timing and different initative concepts and strategies. The Bokuto (Bokken) is used regularly to reinforce posture and good arm postitioning and as a general learning tool in understanding the foundations and fundamentals of Aikido and its core principles, not as a study of swordsmanship.

Practicing with wooden weapons still requires the same protocols as if live blades were in use. Despite the fact that we are not learning how to fight with bladed weapons, nor are likely to face another human being wielding a bladed weapon we are training for the purpose of learning how to avoid, blend and disarm from a number of set attacks. It is important therefore to consider weapons training as real to ensure practice is meaningful.

BOKKEN / BOKUTO : Wooden Sword
JO: A wooden staff representing a Yari (which is a bladed spear like weapon)
TANTO: either a wooden training knife in Kata or a soft foam cyllinder (Softo) for competition practice. 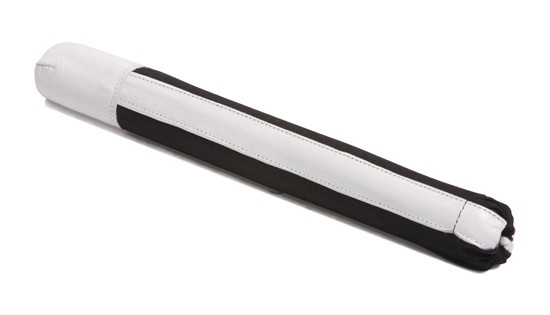 SOFTO
Sport Aikido randori practice and drills makes frequent use of a cloth covered foam tanto (softo) to avoid injury to players competing and practicing. One end is covered in white leather, denoting the point of the tanto and one edge has a band of white leather to indicate the back (blunt) edge of the tanto.  When handing a softo over ensure that the white edge is facing your practice partner to observe good ettiquette.

There may be some variation on how weapons are passed from one person to another from dojo to dojo. But here are some general points to observe

The following would be considered disrespectful and a serious indicator that your ability, knowledge and respect for weapons training is lacking.