Embroidery on Dogi and Obi 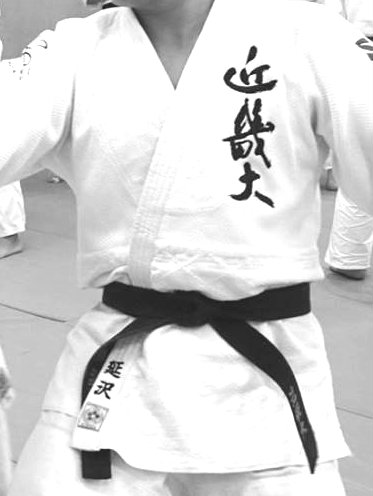 In Japan, the inclusion of one's name on one's equipment is very common, it is even sometimes mandated by the teacher. Embroidering one's name on one's dogi is considered as a mark of humility in Japan (it means that you do not consider yourself worthy enough of interest for the teacher to remember your name). Beyond that, embroidery, whether on martial arts equipment or not, is an important part of Japanese culture. Athletes, martial artists, waiters in restaurants etc. all commonly have their names embroidered on their uniform.

While Japanese people embroider their surnames, westerners tend to use their first-names. Although it is much more common in Japan to call a person by their surname, Japanese teachers will not hesitate to call foreigners by their first name. It is also common to see the name of club, dojo, or university to which one is attached embroidered prominently, whether on the Hakama, jacket, or belt.

Typically, you can write your name horizontally on your left sleeve of your jacket or vertically on the bottom jacket edge where it can easily be seen. Often the Art, Ryu or School is written vertically on the chest of the jacket (left side). If belts are embroidered, generally your name would feature on one end (usually the label end) and your art/ryu or dojo name on the other end. If wearing a hakama, your name, school / home dojo are arranged vertically on the right hip at the back.

The custom of belt embroidery at Shodokan Honbu dojo (SAF) 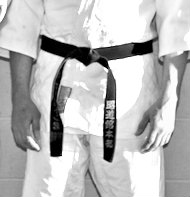 SAF ( and previously JAA ) registered Shodokan yudansha have a belt with (at label end) one kanji before their name, and one after. The name (in katakana) varies with the individual, sometimes first name, sometimes second, sometimes surname in katakana preceded by a romanji initial. In Japan it's usually the second name.

The kanji before the name ( 贈 ) means "presented to/ awarded to" and the kanji after the name ( 君 ) means "kun"  (a title normally used in Japan when adressing younger males or those lower ranked).  On the other end of the belt is the name of the wearer's home dojo. (Or in the case of SAF registered foreigners  -  昭道館 本部 - Shodokan Honbu")

~ If grading at the Shodokan Honbu, Nariyama Shihan (founder of SAF and Chief Instructor) pays for your black belt out of his own pocket. It is his present to you and means you have become his student. Before that, you buy your own belt and are the responsibility of others. Nariyama Shihan does teach kyu grades but it's sort of a line in the sand when you achieve shodan, a mark of your graduation to "serious student" status.