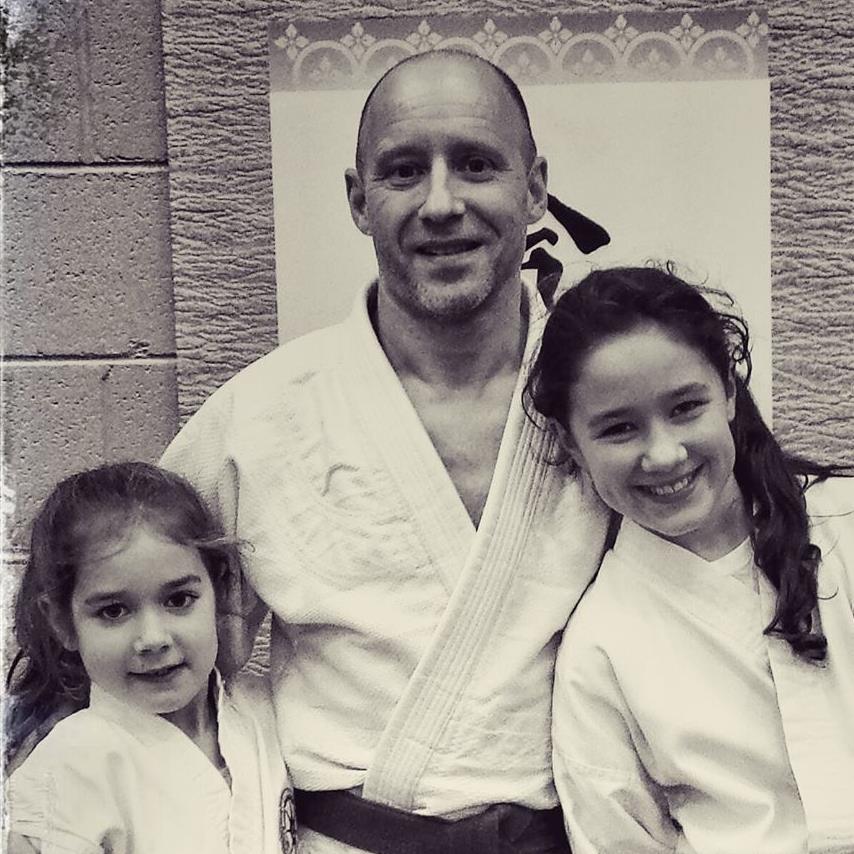 While searching for martial art classes for my young daughters, I came across an advert for a "Parent and Children Aikido class" in a local Community Centre, so we went up to see what it was all about.

I had seen an Aikido demo in Trinity College, Dublin (quite a few years before) and had read a little about it, however what I saw going on in this dojo did not look like any Aikido I had ever seen before...  people were being hit in the face and thrown quite hard. I had thought Aikido was a gentle and flowing art... what was going on!

Joining the adult class the following week, I looked around and nearly everyone on the mat was bigger and younger (although maybe not as good looking) and appearing very serious in their judo dogi waiting for class to begin.

While I had trained in Karate (Wado Ryu) and competitive kickboxing in my college years, football had become my passion after I graduated.  Recurring injuries were now bringing that to an end. I had wanted to return to martial arts for some time, however I was now much older, married, with two young daughters, a business to run and little enough spare time. Was I crazy? My heart rate was certainly up a bit and I hoped I was not showing any outward anxiety.

I had taken my first step on a new budo journey.

Despite a reasonable level of fitness walking in,  I was not used to ukemi and had lost a good bit of flexibility over the years from playing regular football. In truth there were many nights I drove home in those early months barely able to move.

For the first couple of months, I attended beginners class twice a week, and during those early days I don't think I endeared myself to anyone, as, due to ineptitude, tagged one or two with over exuberant atemi or poorly attempted waza.    .... I suppose I was not the only one going home sore from time to time...  apologies:  Sinead, Ruth, Darryl, Karen, Emer, Pam, Eric, Ken, John and Jim. 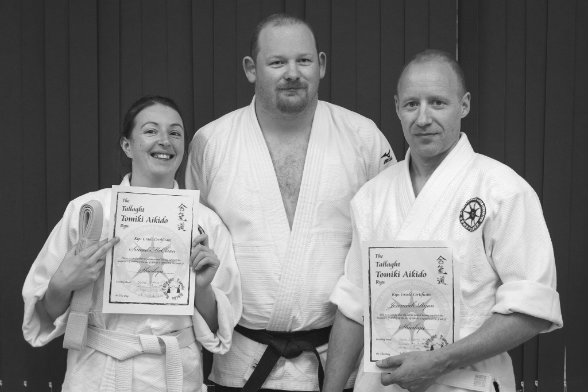 I remember my first grading clearly. I was very nervous. I had forgotten the feeling of performance anxiety that can occur under such close scrutiny. At its conclusion, one of the grading panel commented; "He reminds me of a young Keith McClean ". I was chuffed to receive such high praise, until I discovered later that  Keith Sensei was also accused of being as unyielding and rigid as an iron bar when a beginner too.

Sheer determination, carried me through that first year; the frustrations, feelings of ineptitude, the regular physical discomfort and grindingly slow progress until I had somehow become accepted from time-to-time into the later experienced grade class, no longer having to endure the sounds of training while I showered early downstairs silently swearing to myself. (Thank you Joe Cheevers sensei)

Now I could make a real nuisance of myself, as I was determined to attend all classes, beginner, higher grade and any other classes I could wangle a place into, including training with the youth members. It may very well have been, had I not had talented juniors enrolled, I might not have been looked upon with such tolerance. However, slowly, and with resignation Keith sensei started to realise, "this guy is not going away, I think I'll start using him as an uke, that might soften him up a bit". 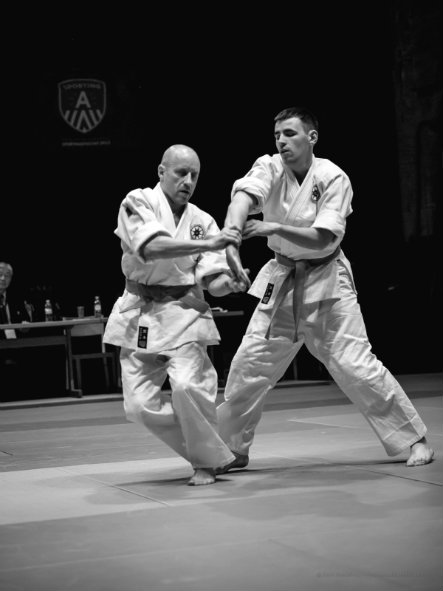 Not too long after that, it was announced that our club would be competing in it's very first competition and that additional training sessions would be scheduled for those competing. I had to earn the additional coaching and so, signed myself up to compete in the ETAN European Championships (Antwerp) in Junnahon, Goshin-no-kata and individual randori. Looking back on it now, it was an optimistic endeavour as a 4th kyu with no skills or experience, but I was on a mission.

What I did not completely appreciate at the time was that I had joined at a key turning point in the development of the club as Keith sensei was also on a mission to transform the clubs direction in his own hunger for improvement and knowledge. As it happened I found myself to be a member of the very first Irish competitive squad as a small club team was assembled and prepared. Again, apprehension and doubts crept in, to be swept aside in the buzz of intense preparation.  And what a great feeling! ...bringing back memories of college days, competing in kata and kumite and the excitement of heading out to battle. Although I brought back no medals and won no bouts, my win was immense in personal development, building new confidence, the fun I had and the bond I started to build with my team mates.

On returning after that first competition, it felt to me that the atmosphere in the dojo had somehow changed, club history had been made, I had been part of it, I had faced a significant personal challenge, pushed through and now felt a new confidence in training. I liked that feeling.

Not long thereafter I attended my first BAA Seminar and external grading under the watchful eye of Vanda Fairchild sensei and in the presence of Satoru Tsuchiya sensei in Queens University, Belfast. When I look back on the video record of my demonstrations at this event I cringe, however, at the time it was another special moment, as Vanda sensei called me out for a special mention when results were announced. This single, kind and encouraging remark from such a highly regarded sensei has remained with me from that day, and I use it to push aside self-doubt and focus on the rewards that can come from making your best effort.

There are important people you meet along your journey (in addition to your chief instructors), that provide guidance and more importantly take time to notice the things you do well, and communicate them to you. These are golden moments, unexpected, but very important milestones in the development of every student.

Having completed GARDA vetting and child protection training I was allowed now onto the mats with the younger members, which again afforded new opportunity for training, as often there was an uneven number on the mat and I was more than happy to step in. Additionally and importantly, training and helping out with our younger members forced me to put aside physicality and focus more on soft technique. I had to admire the youth member's talent and skills which often exceeded my own and their exuberance and energy movitated me to keep-up and train smarter.

It is often during these classes, being on the mat with my daughters, that I feel lucky to be able to share this budo experience with them (even if sometimes they have been embarrassed at their old man's efforts) 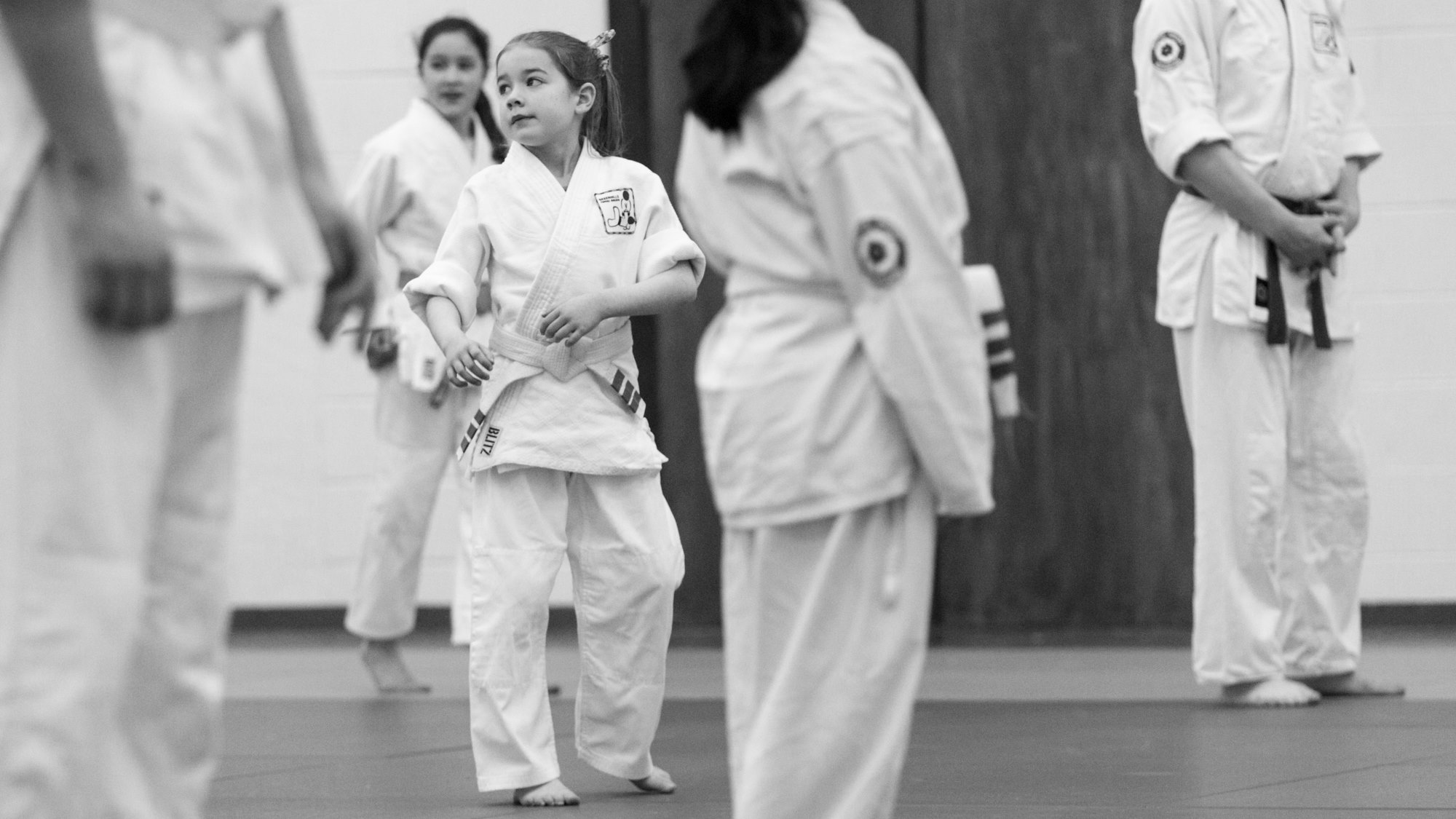 Training regularly, now three and sometimes four times a week, I begin to make slow but steady progress and further competitions even lead to some medal wins.

One of the next influential events on my journey was attending a BAA Summer School during which, due to a scheduling clash, I was "volunteered" by Keith sensei to uke in his place for one of the main seminar sessions by a new and unknown Shinkendo instructor. I distinctly remembering as I stepped onto the mat... This guy looks dangerous.... am I going to get killed here?.  In the end, facing the challenge and performing well made the event very memorable, pushed confidence and uke ability forward another notch.

And so, slowly, in small steps over time, I had somehow made it to 1st kyu.

At all BAA grading events along the way, the standard expected by our club for everyone had risen. Pam, one of the only remaining students from the adult class when I joined, had pushed through to earn her shodan and in doing so set a new club standard and one to which I now aspired.

I realised that 1st kyu was in itself an important milestone and one that should be enjoyed on the road to 1st Dan. I was no longer in such a rush. I was determined now to take whatever time I needed to build a solid foundation on which to walk out with confidence at my examination. 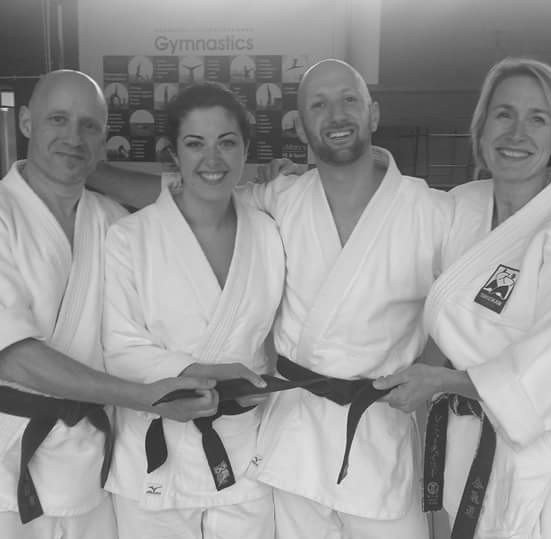 Yet again, opportunity for a higher level of training became available as Keith sensei began preparing for his 4th Dan examination. Both Pam sensei and I were as eager as each other to get stuck in and take this opportunity by the throat to learn new syllabus and improve ukeing skills above our paygrade. Training intensified as additional sessions were scheduled before and after regular practice to assist Keith sensei in his preparations. Not alone did he have to teach himself, he also had to up-skill Pam and I to perform more advanced ukemi in order to receive stronger application. I was loving it.

And what a great event it was and a privilege to be a part of. For me Keith Sensei's 4th Dan grading test was another key milestone for the club and a culmination of twenty years of unbroken training for him.

On the day of the grading, when I stepped onto the mat to uke, I felt a huge responsibility to perform well and not to mess-up. But it was also a proud moment and one I enjoyed immensely.

It took sixteen months of consistent training at 1st kyu, another comp and couple of seminars before I felt I was now prepared and capable to present for Shodan test; but was it enough?

I had learned along the way that your evaluation as a shodan candidate in the eyes of the examination panel as well as your Sensei is influenced by observations not just of your general technical progress but also your attitude to training, your mat ettiquette, your character and behaviour at seminars and comps over the preceeding years of your journey. It's therfore very necessary and important to start building these important foundations and relationships as early as possible.

Finally, and most importantly, the journey to shodan in Aikido is dependent above all upon the support of your family, club members, coaches and instructors. It's not possible to train and advance on your own and all club members contribute to your advancement over time.

Thanks to my family (who support me in my obsessions), all members of DTA, in particular youth members Micheal and Eoghan.  Finally special thanks to Keith and Pam Sensei for their individual personal instruction and mentoring all the way along; and for being fabulous ukes on the day.
(tip for any aspiring candidate, make sure you have the best ukes possible for your test)

So what did I learn along the way:-

Yes it was a great feeling to have achieved Shodan and a great moment to celebrate with my dojo mates and Sensei. However as each day moved closer to the shodan examination, it becomes very apparent that the level of understanding at 1st Dan is in fact only the most basic grasp of the fundamentals of Aikido and that I was facing forward now into the challenge of actually earning the right to wear a black belt in DTA.

Fortunately for me.. the next challenge was only a few weeks away and training acelerated again in preparation for WSAF Aikido World Championships where I could test myself competitively at World Level as a Dan grade for the first time .....