In  Shodokan Honbu Dojo the following set of drills are performed at the beginning of each class, and sometimes also at the end. Tomiki Shihan finalized these drills, with Nariyama Shihan, a few months before he died in 1979.

Here is a list and short description of the drills in the order they are typically done at the beginning of class. 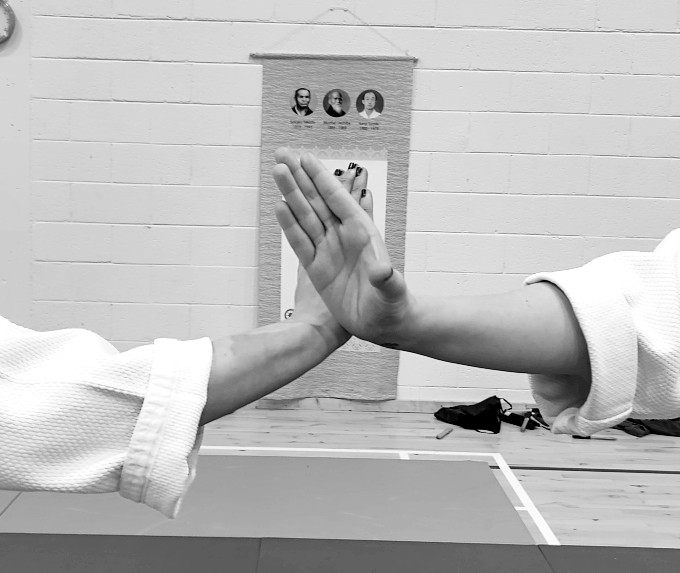 Here, both people stand in matching stances (both people standing right-foot forward, for instance.) They then raise tegatana arms to match (right arm if the right foot is forward.) They touch tegatana at the wrist, and then move smoothly around the dojo, using sliding feet footwork, making sure to keep the same foot always forward, and never bending tegatana arms. The whole point of the drill is to maintain distance as you move together. This practiced both Right and Left hand/feet.  Read More

A variation of this drill is to do it without the arms. You start off touching tegatana to get the distance right, but then lower your arms and then move around, staying square to each other, maintaining distance.

Bogyo means defense. Sei-chu-sen is the central line through the body from top of the head, down through the spine to the floor. In this drill, the two partners take turns being attacker and defender. They start as in tegatana awase and move around smoothly, but then one (pre-designated as the attacker) either raises the opposite arm to begin a strike or raises a leg to begin a kick. Since it is a drill, don’t finish the strikes or kicks. Note that it is the opposite arm that is used to initiate strike. That is, if you are doing the tegatana awase with your right arm forward and touching your partner’s right arm, you will raise your left arm as if to strike.

For the persons defending, as soon as they sense a strike coming, push in with stiff tegatana arm towards the attacker’s throat. To aid in the drill, the attacker allows their tegatana arm to collapse somewhat at the elbow absorbing the defenders motion. The point of the drill is to try to move in quickly and push the attacker off balance. It is, foremost, a timing drill, to teach how to react immediately and enter when attacked. It also teaches that the best first thing to do when attacked is to break your opponent’s balance.

As you do the drill, each person should make three attacks before switching attacker and defender. Perform on both left and right sides. 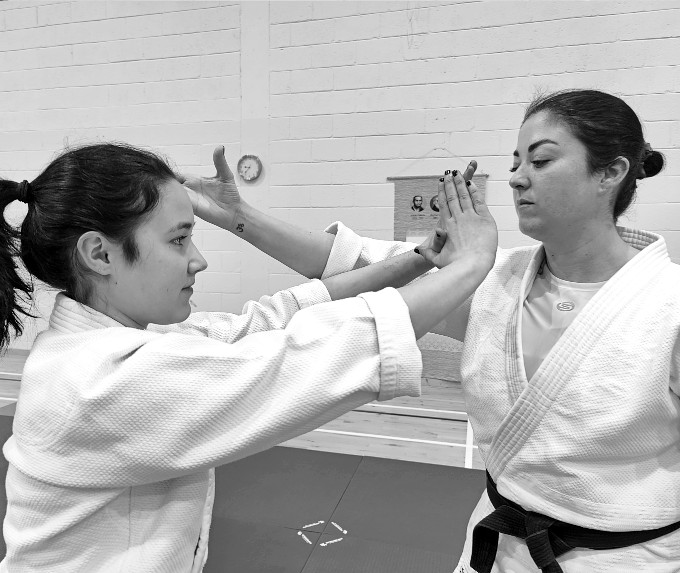 A gassho is a pray position, with the side of the hands pressed together in a triangle position. In this drill, you again work on timing and moving smoothly and quickly when attacked. Here, the pre-designated attacker either goes for an overhead temple strike to the head (migi men or hidari men), or raises a knee as if to begin a kick.

If an overhead strike is initiated, the defender moves forward smoothly and raises up his tegatana arms in a gassho position, putting their hands right up near the attacker’s face. This will disrupt/block the strike and get you used to moving towards an attacker—as paradoxically this is often the safest place to be.

If the attacker raises up a knee as if to strike, the defender blocks it by moving smoothly forward and putting out both tegatana to block the leg on the thigh, just above the knee. The key point here is to keep your back vertical and also to keep looking at the attacker’s face. Do not look at the leg! You should also end up pretty low, as to block properly, you have to extend a leg forward. This will naturally lower your center. 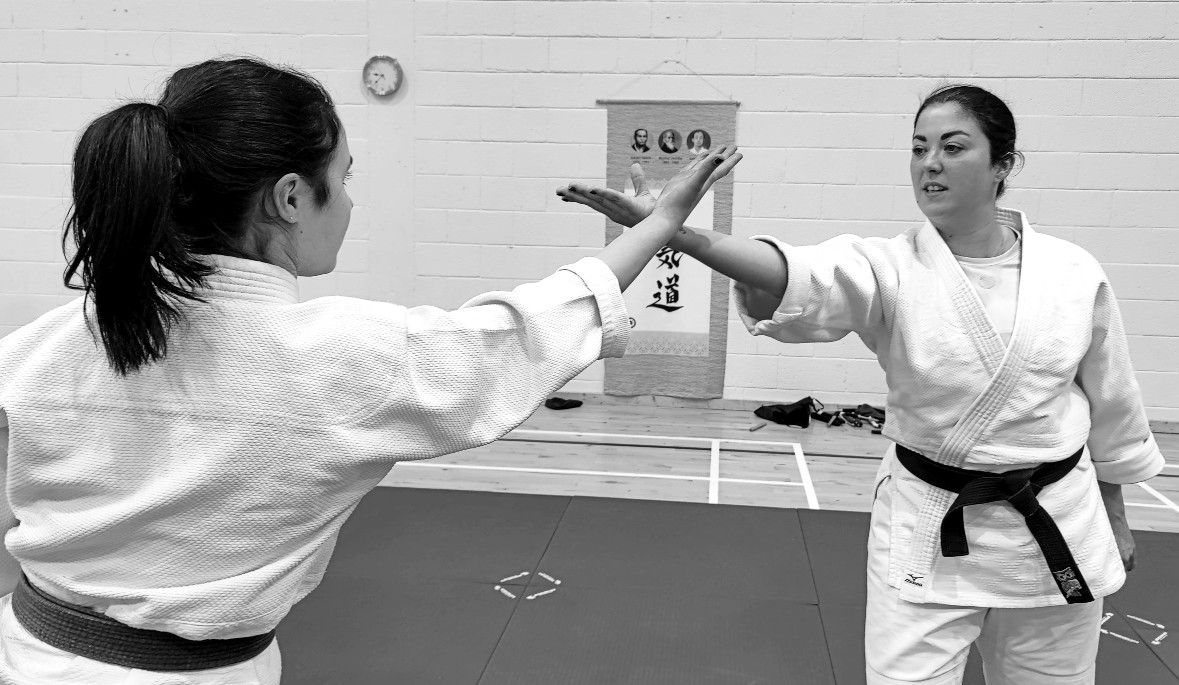 Ippon means one long cylindrical thing. In this case it refers to one arm. So this drill is the one-armed defense drill.

It is essentially the same as Gassho no Bogyo from the perspective of the person attacking. He or she either goes for hidari men or migi men (overhead temple strikes with the tegatana blade) or raises a knee up as if to go for a front snap kick.

As for the defender, they are now only allowed to block with one arm. For overhead strikes, they should meet blade to blade, i.e. the blade side of the blocking tegatana arm (the pinkie finger side) should meet the blade side of the attacking tegatana arm. Also, the whole body should be moved so that at the moment of contact, the blocking arm is right on one's own center line. Between each block, the arms return to hang loosely at the side. You should also be relaxed and well balanced as you await the next strike.

If a kick attempt comes, you have to again block it—but with only one tegatana blade this time (unlike in gassho no bogyo, where you blocked using both arms simultaneously). Block with the shote (base of the hand), with the thumb rotated so that it points back towards you. (The arm is extended as you block; it is still a tegatana.) You do not want to bock with the thumb side as you’ll end up spraining or breaking a thumb. As with blocking kick attempts in Gassho no bogyo, keep your back straight and keep looking at the attacker’s eyes. Circle each other as you do the drill. 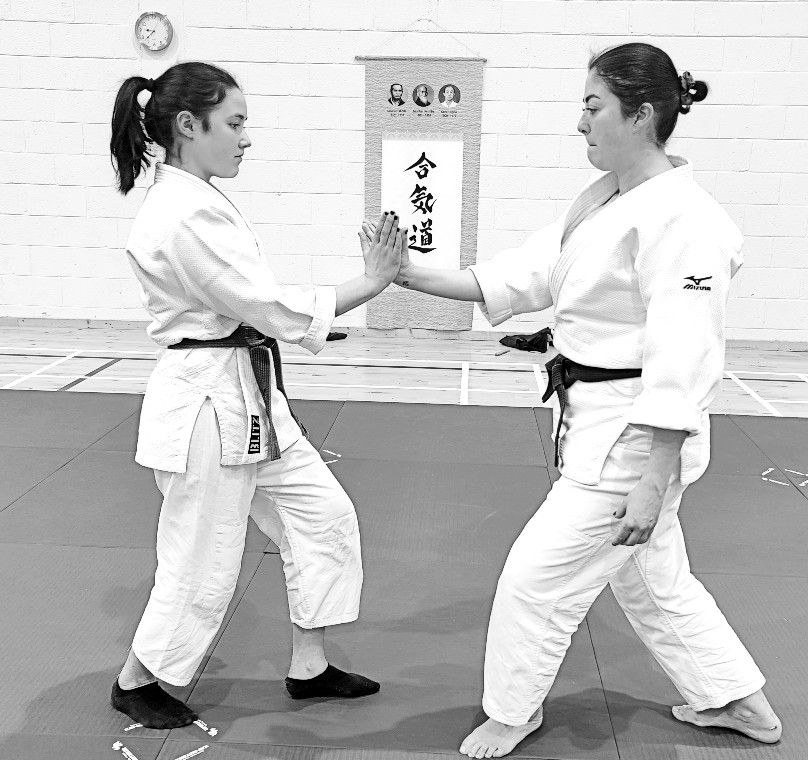 This is the drill where you push on each other using fully extended tegatana arm (left and right) using shote part of hand to connect to shote of partner.  In this drill if the right hand is forward, you should be in left stance (left leg forward).  You shouldn’t be doing it very hard and uke (the person being pushed backwards) should not put up great resistance. The uke should help by keeping their oposing hand in their mutual center and should allow their balance to be broken, only mildly challenging the pusher before recovering. This allows the pusher to discover and work on their balance breaking skills. 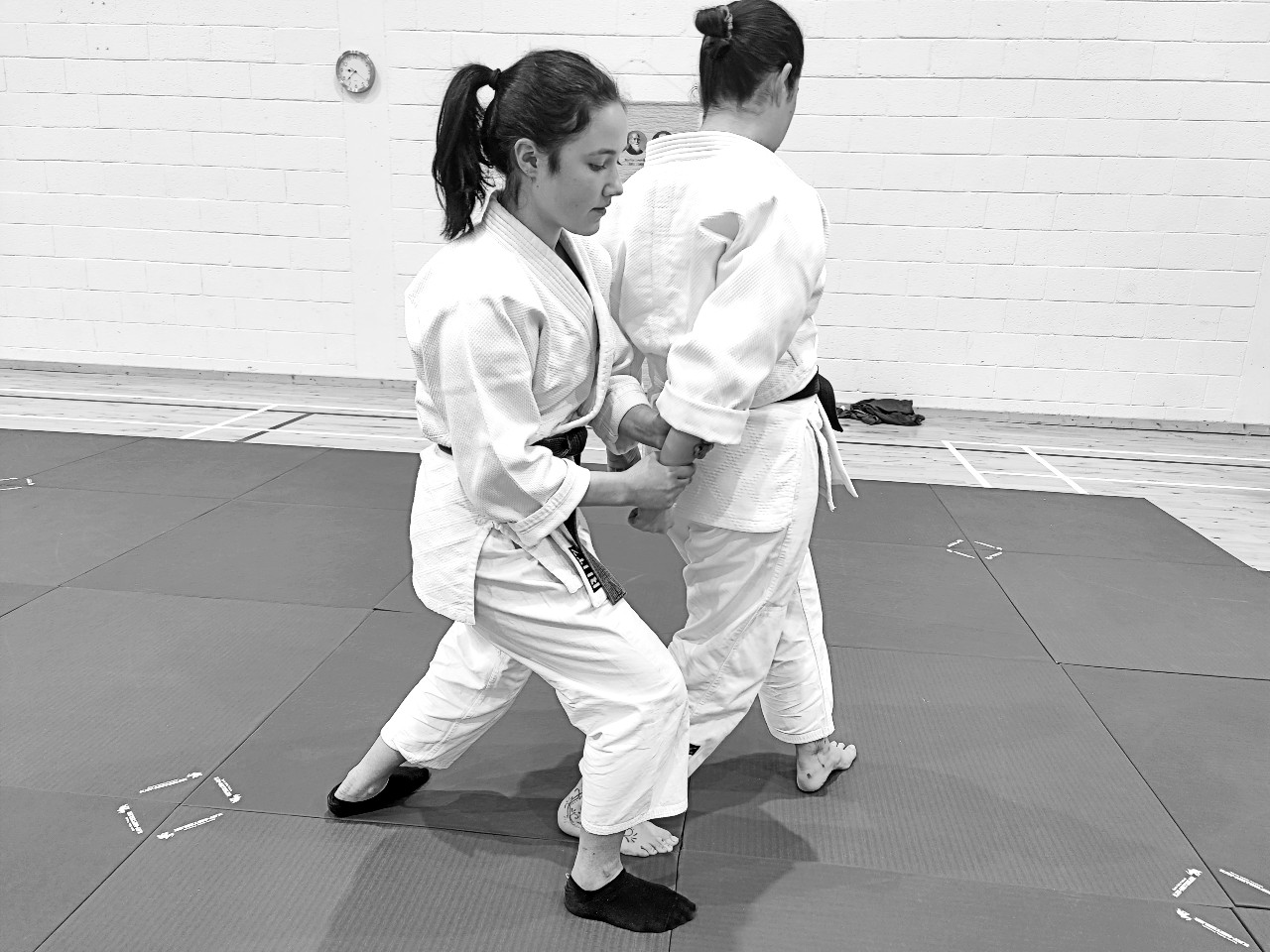 This is The double handed wrist grab from behind drill, where uke grabs one of tori’s wrists using both of his/her own hands. The point is to grab and then push up and forward to break tori’s balance. Good practice requires that uke should definitely try to lift the arm, and that tori should get used to the timing required to suddenly drop their weigh to pin uke before breaking uke’s balance, by turning into uke and raising both hands into gassho position.

At Shodokan, they also start with the hand about six inches behind the glutes, and the hand balled up into a fist. At the moment that uke grabs, tori extends their fingers, to form a tegatana and employ waki-shimete ("to close the armpit", pin arms to body) and lower their posture. Starting in a fist and then extending to a tegatana gets Tori in the habit of instantly going to tegatana no matter what position their hands are normally in. Put differently, you wouldn’t normally have your arm in a tegatana when grabbed. So this makes you practice having to initiate a tegatana immediately after being attacked.

These are the Seven Basic balance breaking drills and considered to be one of the most important and necessary ki-hon practices. At Shodokan, they practice a set of eight: the first seven omote (forward) versions, as well as the 14th technique from the Dai Yon (Nage-no-kata) . Since number 7 and number 8 are both defenses against a double handed wrist grab from behind, this gives the set as practices at the shodokan honbu a nice sort of symmetry.

The go-no-sen no kazushi is a practice that is designed to teach students how to react or move when someone is about to grab your wrist. The idea is to move, slightly before the other person's grasp is fully applied. Once a person's grip is fully implemented, it's considered too late for this practice. (dead, so to speak).

Uke starts by performing a single hand grab from aigamae (matching stance) and then alternated to a grab gyakugamae (opposite stance), for the first six. The seventh and eighth are then both double landed wrist grabs from behind.

This drill in particular is used to bring everyone back in the spirit of blending with an attack and remembering that the first thing you always have to do is break the opponent’s balance. Once this drill is completed, students are now ready to begin to practice formal technique.