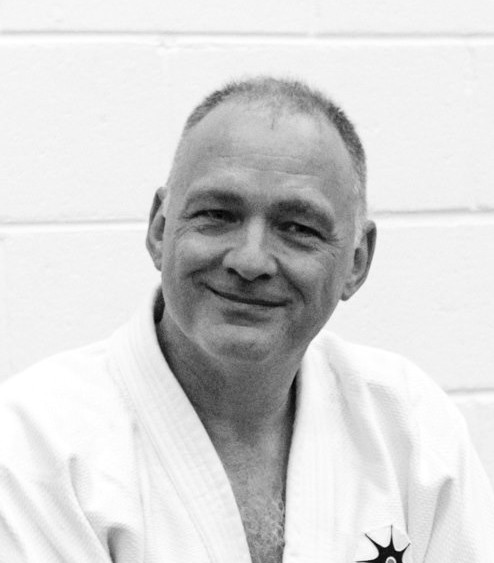 Shaun established Zen Eikoku Tomiki Aikido Renmei ( All England Tomiki Aikido Federation) and ran this organisation from his club in Essex. ZETAR  became affiliated to the BAA (British Aikido Association) in 2012 and now Shaun works in partnership to promote and maintain high technical standards in Tomiki clubs across Britain and Ireland. As well as regularly teaching aikido to adults and children, Shaun works hard to ensure that the Tomiki Aikido Koryu no kata are preserved by regularly giving seminars nationally and Internationally.

Shaun Hoddy Sensei has travelled to Ireland many times to provide instruction at the Rising Dawn Seminars in Belfast and Dublin and has been a source of knowledge, guidance, encouragement and support to our club over the years. 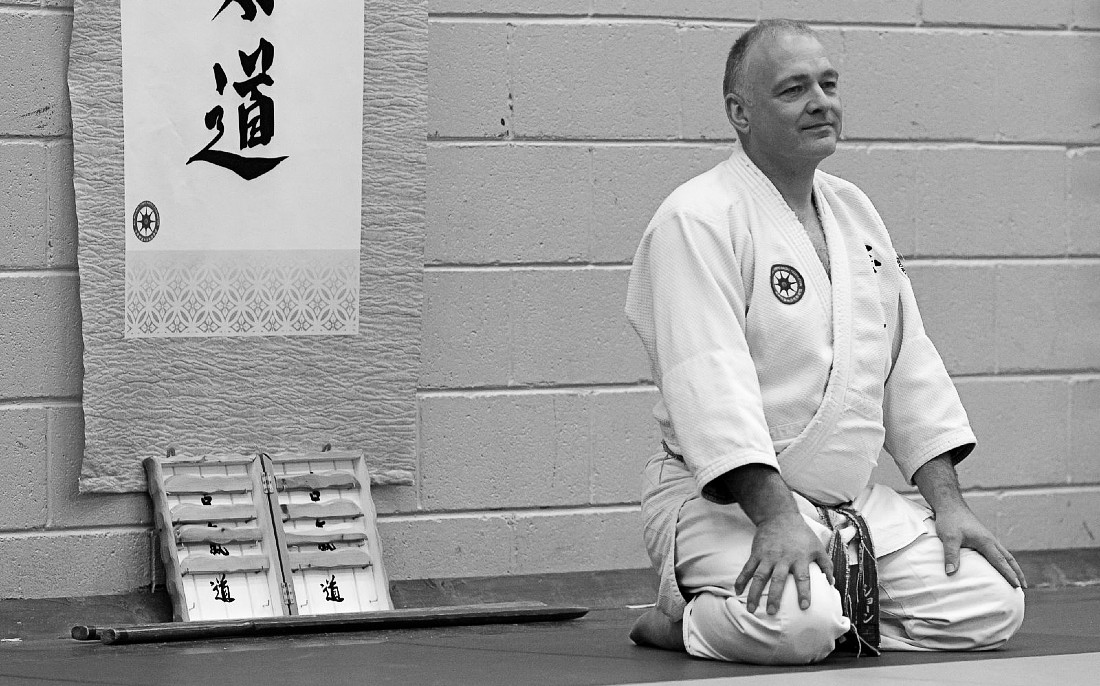 How did you come to Aikido and who were your earliest martial arts influences?

My dad trained in Judo in the early 1960s and about 1968 a Judo club opened in Hornchurch close to where we lived so we both joined. I was seven years old at the time. My Dad also opened a sister club, Saint Albans Judo club of which I was also a member.

One of my Judo instructors, Roland Tann sensei, who was also a City of London Police PT, started a Tomiki Aikido club under the guidance of Brian Eustace sensei who was both a BAA officer and a Home Office advisor on police arrest methods. Roland Tann sensei was also connected to Mike Finn sensei who came and gave demonstrations of various Budo systems which sparked a real interest in Aikido for me so I started my Aikido journey in 1975 at age 14 training under Roland sensei.

In April 1978 Roland sensei, who had become seriously invested in spirituality and religious practice, announced that he was retiring from Judo and Aikido both professionally as an instructor within the Police force and at the club to dedicate more time to his religious activities. 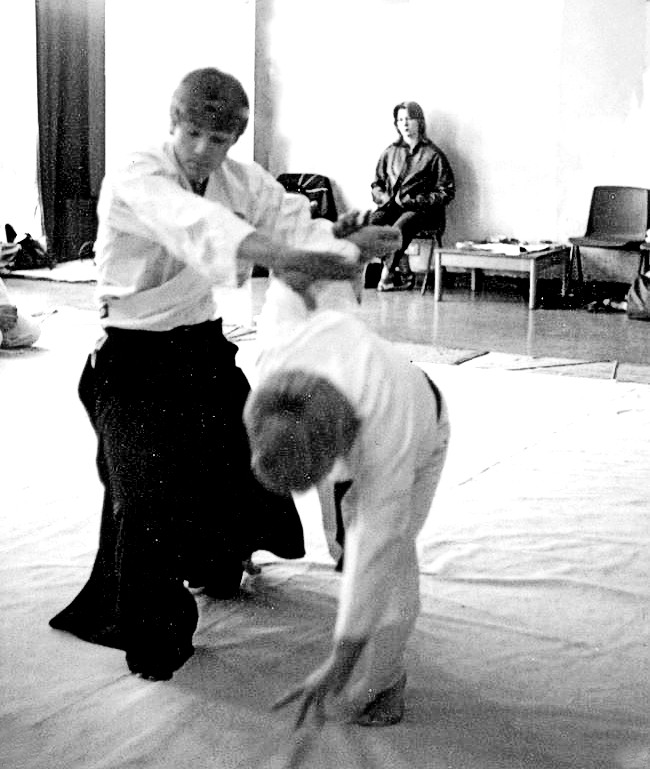 At 17 years of age with a grade of 2nd Kyu and Greg Barton a 3rd Kyu found ourselves responsible for the club. My Dad was a massive support at that time, contacting Ken Broome sensei and driving me to Crystal Palace Aikido club until I learnt to drive.

Ken sensei became a frequent visitor to our club supporting us with grading and courses. At this period of time Itsuo Haba sensei was also teaching at Ken sensei's Crystal Palace Dojo and also at Dr. Lee ah Loi's newly opened Yawara Dojo. When the Crystal Palace club closed, Ken Broome sensei introduced me to Dr. Lee ah Loi. I loved the practice at Yawara dojo and stayed until Dr Lee emigrated to Perth Australia and sold the Dojo. Through Dr. Lee sensei's close association with Japan she was responsible for bringing many highly regarded instructors over including Hideo Ohba shihan who greatly influenced the way Yawara members practiced Aikido. Monday night practice was my favourite session at Yawara as this session was focussed on advanced Dan grade instruction with the likes of Ken Broome, Harvey Goodman, and later Gary and Steve Hogg and many more quality players too numerous to list. These Monday sessions concentrated on the Koryu No Kata, the use of weapons and higher level randori practice.

Dr Lee ah Loi is now one of the world highest ranking female martial artists, holding the rank of 8th Dan in Aikido, 7th Dan in Jodo, 7th Dan in Iaido and 1st Dan in Kendo.

Do you want to tell us a little about Taiho Jutsu?

I studied Taiho Jutsu Arresting Art with Brian Eustace sensei who was technical director for the BAA and Police national self-defence coach and advisor to the home office. The Taiho-Jutsu curriculum was based on Tomiki Aikido and Judo.  As I practiced both arts at the time (1970's), the Taiho-Jutsu training fitted-in very well, providing additional knowledge of practical control and restraint techniques suitable for Police, prison officers and military personnel applications. 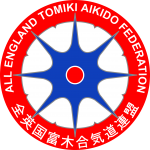 One important step on the journey of our club and other Tomiki clubs on the island of Ireland was membership of "Zen Eikoku Tomiki Aikido Renmei". Can you talk a little bit about it's history?

When Dr Lee ah Loi sensei left the UK to retire in Australia, UK EAA clubs were all going in various directions. ZETAR was founded in 2005 when a couple of us (clubs) needed a formal organisation to secure insurance. As time passed other clubs joined ZETAR from Kent, London, Northern Ireland and Southern Ireland. At the height of our club membership we had over 300 individual members registered. Our Summer school "SOTR" (South Of The River) was always well attended with notable JAA Instructors such as Inoue Yoshiomi sensei and Ehara Tetsu sensei attending. Many BAA members also attended SOTR and Mick Pratt sensei also featured as a guest instructor.

The President of the BAA, Mr. Bob Jones approached me in 2011 about ZETAR becoming a part of the BAA. I felt strongly that membership of the BAA would give all ZETAR members access to more local and international competitive events, more opportunities for interchange with the wider Tomiki community in the UK and the opportunity to try out for the BAA National Squad if they wished.  Something that many ZETAR members, including our club has embraced.

Although we merged with the BAA, our club (Shoshinkan) remains affiliated with the JAA, a relationship which I felt was important for us to maintain.

What is the importance of the Koryu no kata in your practice of Aikido?.

The Koryu No Kata were a core part of our training regime at Yawara, and I have retained this practice in my teaching at Shoshinkan. Dr Lee ah Loi sensei studied with both Tomiki Sensei and Ohba Sensei on her many visits to Japan. Ohba Sensei was instrumental in the development of the Koryu No Kata as part of the Tomiki aikido syllabus as a way of recording the techniques taught to him and Tomiki sensei by Morehei Ueshiba O'Sensei.  Dr Lee ah Loi sensei and Takeshi Inoue sensei both playing a part when Ohba Sensei developed the Koryu Dai Rokku kata.

For me the study of Koryu No Kata has played a major role in my Aikido development. These kata are an important link to pre-war Aiki-budo. Although I believe that competitive aikido is a great tool for bringing young people into the Tomiki system, there is much more to Aikido than randori alone and by study and practice of the Koryu Kata there is a path for deeper understanding and progression in the art as well as facilitating training into older age.

You have been a constant on the Tomiki Aikido scene for many years and a custodian in the UK of the koryu no kata in some sense. What are the dangers of this knowledge being lost or undervalued?  What do think should be done to ensure it's continued transmission?

I feel that koryu no kata are a core part of the Tomiki system and have immense value. I look to what is happening in the JAA at present, in that they are having to call back many of the older Aikido-ka who trained back in the day with Ohba and Tomiki shihan to teach / re-learn the Koryu No Kata. My teacher, Dr Lee ah Loi sensei was in Japan at the time when some of these were created. Inoue Takeshi and Loi were used by Ohba shihan when developing the sequence of techniques in the final kata he worked on.

I would hope that within the BAA Tomiki Aikido syllabus the Koryu No kata will be retained and given the improtance I feel they deserve.

Whatever happens in the future, I will continue to practice and teach the Koryu No Kata. If people want to join me on that journey that is great. I take the view that the practice of Aikido is a personal thing and we all have different goals and ideas of what we want from it. Of course that also changes with age and time.

Now you're older, how do you see your personal future coaching Aikido - what developments would you like to see?

I believe that the future of Tomiki Aikido is within Junior and Youth development. When I look at the population of members within the BAA, most of the long term high grades have started as Juniors or Youth members. I am a case in point. This also creates a foundation for good national squad players and at a slightly later stage, developing good quality younger coaches that attract more young people into the sport and system.

Although as a style we are growing in the UK, I would like to see more towns and cities with a Tomiki/Shodokan Aikido club, with all of those clubs encouraging and offering pathways to junior coaching.

I hope to further develop Junior/Youth Aikido in Essex. My immediate plan, now that I am retired from full time employment, is to work with local education instutitions to promote Tomiki Aikido as a competitive sport and an alternative extracurricular activity for young people.

Thank you Sensei for taking the time to chat. Have you any final words?

You are welcome.....   I would like to extend a welcome to any Tomiki practitioner who find themselves in Essex, to visit our dojo and train. Just send me a message first. 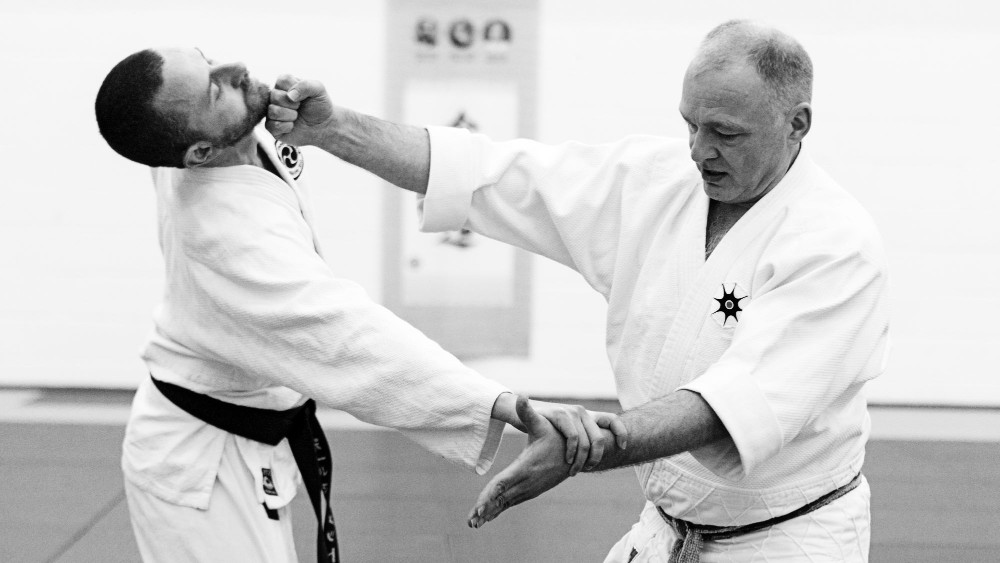 (1) Itsuo Haba (はばいつお) : Born. 8 August 1955. 7th dan Tomiki Aikido-JAA.  High school English teacher. Graduate of Waseda University, where he began aikido under Kenji TOMIKI and Hideo OHBA in 1974 as a member of the WASEDA UNIVERSITY AIKIDO CLUB. All-Japan Student Champion, 1978; National Workers Champion, 1983 and 1985. In November of 1979, went to England and Europe where he taught for 3 years, largely in association with Dr. Ah Loi LEE.

(3) Brian Eustace (1931 - 2012) ,9th Dan Taiho-Jutsu, 8th Dan Tomiki Aikido, 2nd Dan Judo. Brian wrote several books on Aikido, judged competitions in Europe and Japan. CID and self-defence training instructor with Warwickshire Police he was also recruited by the Home Office as the first chief instructor in the art of Taiho Jutsu to forces across the country. He also travelled to Ireland to teach techniques to the Garda Siochana.