Genesis of the Basic-17 techniques

What was the genesis of Competition and the Basic-17 techniques as practiced in shodokan / tomiki aikido? 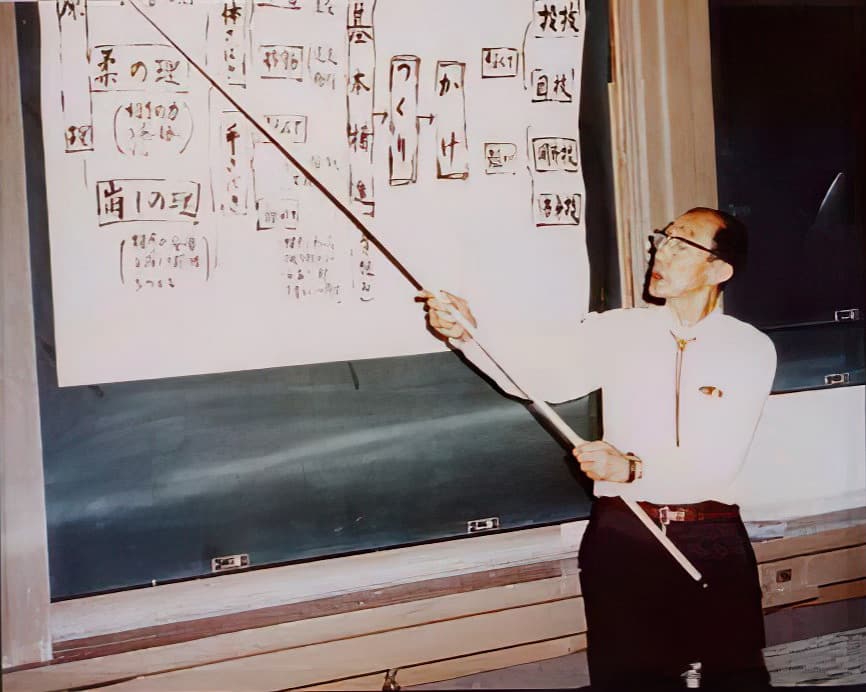 Tomiki Sensei, in 1949 was a professor at the prestigious Waseda University and also headed up the Judo school there.

He also taught Aikido or "Judo-Taiso" to some judo students after normal Judo training ended, as an unsanctioned "Doka-Kai". (Doko-Kai”, meaning a loosely organized club made up with people of the same interest.)

Unsanctioned sport clubs (Doko-Kai) had neither the prestige nor the status of sanctioned clubs such as Judo, Kendo, Karate, baseball, soccer and other major sport clubs.

All Students at Waseda were at that time required to join a sports club as part of their syllabus, so it was an ambition of Tomiki Sensei to promote and establish Aikido as a legitimate option of study for students at the university, which could only happen if he could establish a "recognised" Aikido club.

To become a recognised or sanctioned sports club at Waseda there was a stipulation that a method should exist to measure and/or judge the progress and ability of students, and that any clubs belonging to the official Athletic Association must have a formal syllabus and form of competition of some fashion.

This stipulation led to Tomiki sensei, adopting the methods of Kano Sensei (by which he formed sports safe techniques for Judo from the martial art of Jiujutsu) to arrive at a "sanitized" set of Aikido techniques suitable for Randori-ho.

By 1952 he had between 12 and 15 techniques developed and a workable competition format, such that in April, 1958 Waseda University approved his Aikido Club as an officially sanctioned sport club (called “Undo Bu” in Japanese), while no other universities recognized any Aikido clubs as such.

In May 1956 Tomiki Sensei published a book on Judo that has an appendix on Aikido where he writes about this work and details 15 techniques or principles for randori use in Aikido.

From this starting point the Randori-no-Kata (ju-nana hon) we are familiar with was developed.

in Tomiki sensei's own words:-

"Waseda University Aikido Club was established in April 1958 and at the same time, aikido was put into the university curriculum as one of the regular courses. Before that, the Committee of physical education, which consisted of the Dean of each department, the head of each sports club and the professors of physical education, requested an explanation and presentation of material about the following three themes for the approval of the club.

The first was the historical and traditional significance of Aikido as a Japanese budo. The second was the significance from the point of view of physical education and the practice system of Aikido. The third was the possibility of International development in the future.

The committee asserted that modern budo should provide the opportunity for safe competition and advancement as in Judo and Kendo. They asked how was it possible to have Aikido matches as a sports contest because in old bujutsu a real fight was the only way to evaluate ability objectively.

As a result of this conference, the committee approved the creation of the Waseda Aikido Club on the condition that the Aikido competition method be completed."

It is important to recognise that the "Randori-no-Kata", is as the name suggests, primarily a kata for randori practice, and should be viewed in that light. The techniques themselves are not meant to represent a complete style or Ryu-ha of aikido, they are actually a small subset of techniques that have been approved for Randori practice and competition.

However, by breaking aikido down in this manner, Tomiki Sensei also discovered a method to transmit key principles of Aikido in an easily absorbable manner to university students (who might only have four years to study with him), and that is why the Randori-no-kata has become the great learning tool it is, and one that informs understanding of the legacy Aikido techniques as retained and taught by way of the Koryu no Kata.

Looking at all of this in retrospect:-